For the fourth year in a row, our PROPS partner this holiday season is Save Our Springs Alliance! Pick up your order on Wednesdays this month and support one of the best organized environmental non-profits in Austin! 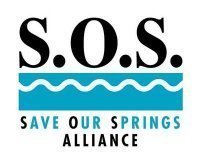 The Save Our Springs Alliance works to protect the Edwards Aquifer, its springs and contributing streams, and the natural and cultural heritage of the Hill Country region and its watersheds, with special emphasis on Barton Springs.

The Save Our Springs Alliance sprung to life in 1990 as a loose coalition of citizens fighting a massive development proposal for the Barton Creek watershed. On June 7, 1990, more than 1000 citizens signed up to speak to Austin city council in opposition to the planned 4,000-acre Barton Creek PUD. After an all-night meeting, council unanimously rejected the PUD, and a movement began to strengthen the 1986 Comprehensive Watersheds ordinance under the acronym SOS: “Save Our Springs”.